Mention the name L.D. Arrington to people in Franklin County, and the first thing many will say is, “He’s a self-made man. I remember when he was a meat cutter at Virginia Markets.”

The description best sums up the story of the Rocky Mount man who climbed the fast food industry’s ladder to success. He started with Dairy Queen and later added Bojangle’s franchises.
​
Last week, the Franklin County Board of Supervisors passed a resolution honoring Arrington for 50 years in business. Rocky Mount Supervisor Charles Wagner and county Administrator Brent Robertson presented Arrington with a plaque at the Arrington Enterprises Inc. office.

Also on hand for the presentation were his wife of 61 years, Ruth; son David; daughter, Deborah; and long-time employees Shelby Brooks and Darlene Blankenship.
“It is a great honor I never expected and will be forever grateful to Franklin County and its residents for supporting our efforts over the past 50 years,” he said.

Arrington Enterprises (AEI) employs between 200-300 people and has an annual payroll of more than $4 million. Retail sales are in excess of $12 million at its three county Dairy Queen locations and one in Danville, along with the three Bojangle’s restaurants.
In addition to his business interests, Arrington was recognized for his community service. Especially noted was his leadership in the “Lights for Life” project. The drive started on the heels of the July 26, 2010, fire truck crash that killed Rocky Mount Fire Chief Posey Dillon and veteran firefighter Danny Altice.

The effort raised $278,000 to help the Town of Rocky Mount purchase equipment that allows emergency response vehicles to change traffic signals to red as the vehicles approach intersections.

His Dairy Queen restaurants were also recognized as the number one national fundraiser for five consecutive years for the Children’s Miracle Network.

In addition to the Children’s Miracle Network, Arrington’s Dairy Queen restaurants have supported “We Care of Franklin County” for many years.

Arrington was born in Danville and raised in Bassett. He and his wife came to Franklin County in November 1956. The skilled meat-cutter was transferred from the Martinsville Virginia Markets supermarket to the one in Rocky Mount on Main Street. The store became later known as IGA.

Arrington was eventually promoted to supervisor with IGA, a position he held until 1965. That was when Arrington partnered with Carl Simpson to purchase Angle’s Supermarket. It was located beside the current Dairy Queen restaurant on Route 40 West.
Arrington and Simpson renamed the supermarket Foodtown. Two years later, Arrington and his wife became sole owners, and the name was changed to Thriftway. A year later, the couple purchased the popular drive-in restaurant, known as Hugh’s Snack Bar, from county treasurer Hugh Turner.

In 1970, the Arringtons purchased Dairy Queen, the county’s first national chain restaurant, from Rev. Joe Lindsoe. It was located on Route 40 East. Two years later, Hugh’s was converted to a Dairy Queen.

The couple continued to expand by incorporating their businesses into Arrington Enterprises Inc. A new Dairy Queen was built on Route 40 in Ferrum in 1993. The last DQ, this one in Danville, was added to the corporation in 1998.

The Arringtons acquired the Bojangle’s franchise in 1996. It was incorporated into the new Plateau Plaza plans when it was constructed on U.S. 220 North. Arrington-owned Bojangle’s restaurants have been named winner of the national “BoFest” contest four times in five years.

A second Bojangle’s was built on Route 40 East in Rocky Mount in 2003 and the third franchise store was constructed at Lake Watch in 2008.

Over the years, the Arringtons have also owned DQs in Chatham, Collinsville, Martinsville, Laurel Park and Penhook, along with Just Subs in Rocky Mount and Martinsville.

AEI “family employees” include David Arrington, Deborah Arrington Russell, Brian Arrington and Jaime Arrington Manning. Shelby J. Brooks has been with the company for 49 years, while Darlene Blankenship has 41 years of service.

The Arrington’s younger son, Doug, and his wife, Karen, went out on their own in 1990 to form Hometown Ice in Rocky Mount.
​
The Arringtons are long-time members of Sandy Ridge Baptist Church, where L.D. serves as a deacon.

The owners of the Dairy Queen on Riverside Drive are working out the final steps on what it will take to get the doors open again, according to Brian Arrington, vice president of operations for Arrington Management Group.

The store suffered serious damage during a July 9 fire — enough damage that the owners are seriously considering constructing a new building rather than trying to repair the old one.

Arrington said that process has involved discussions with the landlord, a contractor, their insurance agent, a surveyor and Dairy Queen’s corporate office.

As the insurance company determines its estimate for repairing the building, Arrington said a contractor has worked with plans from Dairy Queen corporate to build a more modern building incorporating the “new DQ image” at the site as well as public restrooms.

A local surveyor and engineer have worked out a new site plan to squeeze a slightly larger building while maintaining adequate parking and a drive-thru lane, which will then have to be approved by city officials before construction can being.

However, most critical to the plan is working out a new lease with the landlord, Arrington said.

“We are nearing an agreement with the landlord to extend our lease,” Arrington said.

Arrington said his company will have to make up the difference between what the insurance company is prepared to pay for repairing the building and what a new building will cost.

“The lease extension is crucial,” Arrington said, noting that replacing rather than repairing will require capital investment beyond the insurance claim awarded. “… We needed to make sure the lease is long enough to recoup the investment.”

Once all these elements come together, Arrington said “you will start to see movement at the store,” though no date has yet been set for re-opening.

Arrington said he is anxious to reopen.

“As of today, we have been closed for 48 days,” Arrington said Wednesday. “I assure you that we are working hard to get everything in place to return to Danville.” 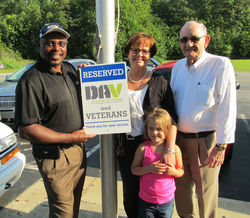 By MORRIS STEPHENSON, Special to the News-Post

At the urging of David Cuff, commander of the Franklin County and Smith Mountain Lake Disabled American Veterans (DAV), the national veterans’ organization has designed a new reserved parking sign for members of the DAV and all veterans of the armed forces.

Once Cuff received the signs, he began asking local businesses to designate parking spaces for the signs.

Last week, L.D. Arrington, CEO of Arrington Enterprises Inc., announced his company’s participation in the new DAV program. His Dairy Queen and Bojangles’ restaurants will be the first in the nation to display the signs and reserve the parking spaces.

Signs have also been placed at Jim McKelvey’s Plaza Shopping Center at Westlake and the Home Depot on Franklin Road in Roanoke.

“These businesses are the first in Virginia and the nation, as far as I know,” Cuff said. “I contacted DAV in December with this idea and the first signs just arrived last week.”

Cuff will continue contacting business owners and operators in an effort to get as many signs as possible placed in parking lots throughout Franklin County and the surrounding areas.

“The signs are very eye-catching and easy to locate when pulling into a parking lot,” Cuff said.

The DAV logo is centered at the top of the sign under the word “Reserved.” The wording notes, “DAV fulfilling our promises to the men and women who served and veterans. Thank you for your service.”

Cuff is a county native and former DAV state commander. He formed Chapter 60 in 2009, with 13 members. Since then, the group has grown to include 225 members. “And we are still growing,” he added.

Tuesday July 28th from 5pm to 8pm our Ferrum DQ hosted a fundraiser benefiting Children's Miracle Network.  "Family Fun Night" offered free DQ Ice Cream Cones, carnival games, & a raffle for a $25 DQ Gift Card.  We at Arrington Management Group are very proud of the time, and dedication that the Ferrum DQ Team took in the planning, promotion, and execution of this successful event that raised $478 for Children's Miracle Network.

Fire at our Danville DQ 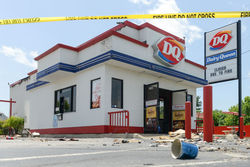 Officials unsure if Dairy Queen can be repaired or will have to be rebuilt
GoDanRiver.com
Posted: Thursday, July 9, 2015 12:30 pm

The Dairy Queen on Riverside Drive will be repaired as quickly as possible following an early-morning fire Thursday, according to Brian Arrington, vice president of operations for Arrington Enterprises Inc. of Rocky Mount, which owns the restaurant.

Guill said the area of origin for the fire was in the rear of the building, where there is a lot of electrical equipment.

“We don’t know the object of origin yet; we have to sort through the wires and do some testing,” Guill said.

Arrington said he received a call about the fire at about 1:30 a.m. and arrived at the location at about 2:45 a.m.

“It was a blessing it was after hours and none of our team was here,” Arrington said late in the morning as he watched insurance adjustors go over the building and waited for a reclamation company to arrive to begin cleanup efforts. “There’s always a silver lining, and I’m trying to find one here.”

Arrington said the company has loss-of-business insurance, which will help the 20 employees of the location.

“Our goal is that during this process our team doesn’t suffer,” Arrington said.

By the end of the day Thursday, Arrington said he was uncertain whether the building can be repaired or will have to be completely rebuilt.

“I will be meeting with our contractor [Friday] and the insurance claims adjustor Monday or Tuesday,” Arrington said. “I hope to know more then.”

The Danville Fire Department responded to the fire at 12:45 a.m., finding heavy smoke coming from the roof.

The fire was located above a cooler/freezer unit at the rear of the store, but firefighters were unable to quickly extinguish it.

“Crews evacuated the structure at 1:10 a.m. as fire vented through the roof and a defensive operation was untaken,” the fire department news release stated.

The fire was brought under control at 2:30 a.m. The building sustained heavy smoke, heat, fire and water damage, according to the fire department.